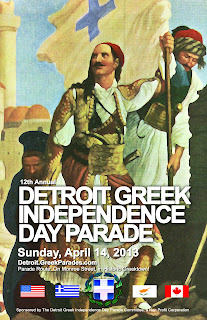 GRAND OPENING OF THE HELLENIC MUSEUM OF MICHIGAN
Located in Midtown - The Cultural Center of Detroit
The Hellenic Museum of Michigan, 67 E. Kirby, Detroit, MI 48202 / www.hellenicmi.org

5:00 p.m. – Blessing by His Eminence, Metropolitan Nicholas of Detroit

Throughout the Evening:
6:30 p.m. – Grand Opening Gala Reception at the Detroit Institute of Arts (across the street)

The 12th ANNUAL DETROIT GREEK INDEPENDENCE DAY PARADE
In Historic Greektown, on Monroe Street
10:30 a.m. - Liturgy and Hierarchical Doxology at the Church of the Annunciation in Greektown.
1:30 p.m. - Pre-Parade Dignitary Reception, press conference and dance performance inside the Compuware Building Lobby. Parade staging and unit placement will be right in front of the Compuware Building.
3:00 p.m. - The Detroit Greek Independence Day Parade starts down Monroe Street. And at the conclusion of the parade, there will be a Post Parade Ceremony and Dance Performance in Greektown.

Posted by Detroit Greek Parades Admin at 11:26 AM