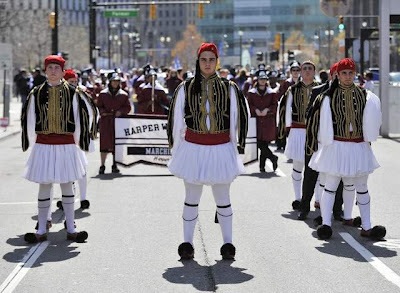 Detroit --Greektown became the heart of cultural pride Sunday afternoon when thousands of Greek- Americans and others flocked to the historic district for the 11th annual Detroit Greek Independence Day Parade.
Parade-goers donned vibrant costumes representing different sections of the Hellenic Republic and waved Greek and American flags up and down a half-mile stretch of Monroe Avenue.
Highlights included live music, courtesy of local marching bands, and vintage cars, including a 1939 Cadillac Fleetwood that caught the eye of many bystanders.
The event commemorates Greece's rise against the Ottoman Turks in 1821 after being held in slavery for 400 years.
Best friends Hannah Avdoulos, 16, and Stefanie Papasoglu, 17, joined in the parade as members of the local Greek dance group affiliated with the Nativity of the Virgin Mary of the Greek Orthodox Church in Plymouth.
They wore traditional costumes from Greece's Mani Peninsula.
Avdoulos, who has performed with the group for three years, said she comes from a long line of Greek dancers.
"It's a great way to keep up with the community and it's a great way to embrace my culture," she said.
Stefanie Papasoglu said her mother, Yianna, is constantly reminding her and her friends about the Greek origins of mathematic phrases and words commonly used in American culture.
Yianna Papasoglu, who has taught at a local Greek school, said it's important for youths to know their history.
She said she's not that much different than the culturally prideful parent in the hit film "My Big Fat Greek Wedding."
"I believe everyone should be proud of who they are," she said.
More than 5,000 people have annually flocked to the parade since 2001, said Joan De Ronne, a coordinator and member of the parade's committee.
The parade mirrored similar events held Sunday in Greece.