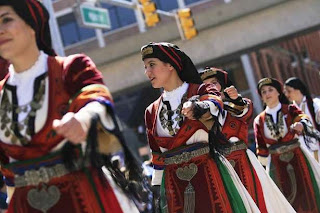 Detroit's Greektown was a whirlwind of activity Sunday with dancers in colorful costumes, floats, marching bands and vintage cars on display for the 11th annual Detroit Greek Independence Day Parade.
Under sunny skies, thousands of people watched the festivities commemorating the anniversary of Greece's independence after 400 years of Ottoman rule.
"We've been coming to this event every year since it started," said Eleni Dionyssopoulos of Grosse Ile, who, with her husband, Stavros Dionyssopoulos, and three children -- all in red and white mainland Greek dress -- prepared to march in the parade with other members of St. George Greek Orthodox Church in Southgate.
"Obviously, we're very proud of our Greek ancestry, and it's important that our children learn about their heritage and carry on the legacy," she said.
"Today we acknowledge our Greek ancestors and their brave fight for independence," said Peter Panourgias, 53, of Troy, one of the organizers of the parade.
Standing along the parade route, Mike Mikha, 36, of Windsor was the image of pride and nationalism, draped in a large blue and white Greek flag.
"I'm expressing solidarity while celebrating Greek Independence Day," said Mikha, who attended the event with his wife and two children.
"My heritage is important to me, and today all Greeks share a common bond." 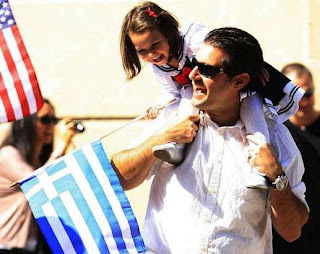 Taki Karras, 35, of Ferndale holds his daughter Evan Gelia, 2, on his shoulders as they attend the celebration in Greektown. "Today we acknowledge our Greek ancestors and their brave fight for independence," said Peter Panourgias.